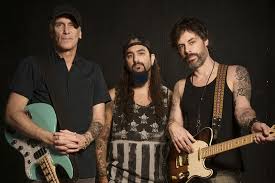 When asked about the band’s main influences, Mike Portnoy commented that they are working towards a classic rock sound, influenced by Led Zeppelin, Cream, Jimi Hendrix, Grand Funk Railroad, as well as newer artists such as Soundgarden, Alice in Chains, Black Crowes and Lenny Kravitz. The band’s self-titled debut album was released in Japan on May 5, 2013 through Victor subsidiary WHD Entertainment, with a worldwide release following on July 23, 2013 through Loud & Proud Records. See for more.