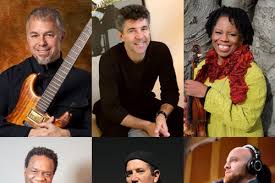 Chieli Minucci (born April 17, 1958 in New York, New York is an American guitarist known as the leader of the Grammy-nominated contemporary jazz group Chielli Minucci & Special EFX. His father, Ulpio Minucci, was a concert pianist and composer who wrote the music to the 1955 hit song “Domani,” as well as “A Thousand Thoughts of You,” and “Felicia” (both sung by Nat King Cole). Minucci & Special EFX have recorded over 30 CDs, 8 of them solo releases. He has recorded and performed with pop music artists such as Celine Dion, Lionel Richie, Jennifer Lopez, Jewel, Mark Anthony, Jessica Simpson, and many more. See for more.

Dancing With a Ghost