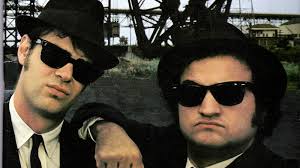 The Blues Brothers are an American blues and soul revivalist band founded in 1978 by comedy actors Dan Aykroyd and John Belushi as part of a musical sketch on Saturday Night Live. Belushi and Aykroyd fronted the band, in character, respectively, as lead vocalist ‘Joliet’ Jake Blues and harmonica player/vocalist Elwood Blues. The band was composed of previously well-known musicians, and debuted as the musical guest on the April 22, 1978, episode of Saturday Night Live, opening the show performing “Hey Bartender”, and later “Soul Man”.See for more.

Everybody Needs Somebody To Love

Do You Love Me

She Caught The Katy

ghost riders in the sky