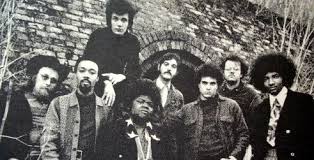 The Electric Flag was an American blues rock soul group, led by guitarist Mike Bloomfield, keyboardist Barry Goldbergand drummer Buddy Miles, and featuring other musicians such as vocalist Nick Gravenites and bassist Harvey Brooks. Bloomfield formed the Electric Flag in 1967, following his stint with the Butterfield Blues Band. The band reached its peak with the 1968 release, A Long Time Comin’, a fusion of rock, jazz, and R&B styles that charted well in the Billboard Pop Albums chart. Their initial recording was a soundtrack for The Trip, a movie about an LSD experience by Peter Fonda, written by Jack Nicholson and directed by Roger Corman. See for more.

She Should Have Just”