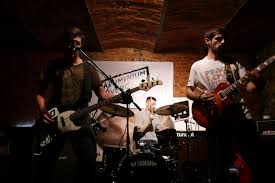 Aluminium is the name of a music project based upon an orchestral reworking of the music of the band The White Stripes. Its members are Richard Russell and Joby Talbot. Jack White, of the White Stripes, has endorsed the project. Rob Jones has also produced an exhibition of artwork based on the album. Ten images based upon the album, as well as a series of other White Stripes and Raconteurs artwork, all by Rob Jones, were displayed at the Richard Goodall Gallery in Manchester in Autumn 2006. In the 999 LP editions of the album there are 10 inch square sections of a silk print by Rob Jones in each sleeve. See for more.

I’m Bound to Pack It Up

The Hardest Button to Button

Forever For Her Is Over For Me

Why Can’t You Be Nicer To Me