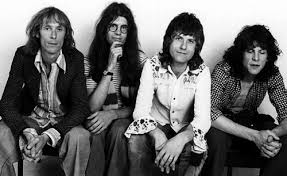 Hatfield and the North were an experimental Canterbury scene rock band that lasted from October 1972 to June 1975, with some reunions thereafter. In mid-1972 the band grew out of a line-up of ex-members of blues/jazz/rock band Delivery, Pip Pyle (drums, who had since played with Gong), Phil Miller (guitar, who had joined Matching Mole), and Phil’s brother Steve Miller (Wurlitzer electric piano, who had joined Caravan). Replacing Roy Babbington on bass was Richard Sinclair (who played with Steve Miller in Caravan). This line-up moved away from the blues idiom of the early Delivery towards pieces based on riffs in odd time signatures and protracted melodies associated with the Canterbury style. See for more.

The Yes No Interlude

Fitter Stoke Has A Bath

Halfway Between Heaven And Earth Live at the Rainbow 1975

Chaos At The Greasy Spoon