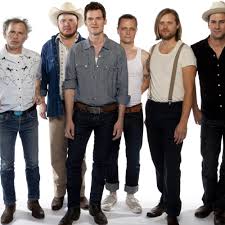 Old Crow Medicine Show is an Americana string  band based in Nashville, Tennessee. Their music has  been called old-time, bluegrass, folk, and alt  country. Along with original songs, the band performs many pre-World War II blues and folk songs. Recording since 1998, they were discovered by famed bluegrass musician Doc Watson while busking outside a pharmacy in Boone, North Carolina in 2000. With an old-time string sound fueled by punk rock energy, they have influenced acts like Mumford & Sons and contributed to a revival of banjo-picking string bands playing Americana music—leading to variations on it. See for more.

Will The Circle Be Unbroken

Tell It To Me

Back to the frontPage.