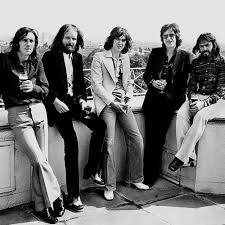 Barclay James Harvest are an English progressive rock band. They were founded in Oldham, in September 1966 by guitarist/vocalist John Lees (b. 1947), bassist/vocalist Les Holroyd (b. 1948), keyboardist/vocalist Stuart “Woolly” Wolstenholme (1947–2010), and drummer/percussionist Mel Pritchard (1948–2004). After signing with EMI’s Parlophone label in the UK for one single in early 1968, they moved to the more progressively inclined Harvest label. The name for the band, according to The International Barclay James Harvest Fan Club, signifies nothing specifically. Having exhausted other possibilities, each of the band members wrote single words on pieces of paper which were drawn out of a hat one by one. See for more.

Who Do We Think We Are?

Love on the Line

Play to the World

Life Is For Living