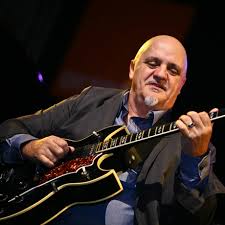 Frank Gambale (born 22 December 1958)is an  Australian jazz fusion guitarist. He has released eleven studio albums over a period of more than two decades, and is renowned for his use of the sweep picking and economy picking techniques. Gambale graduated from the Guitar Institute of Technology in Hollywood, with Student of the Year honors. He also taught there from 1984 to 1986. After graduation, he played the jazz club circuit with his own band and in 1985 released his first studio album, Brave New Guitar, through Legato Records (owned by Mark Varney, brother of Shrapnel Records founder Mike Varney) in what was to be a three-album contract. In that same year, he toured with Jean-Luc Ponty and shortly afterwards began a six-year stint with the Chick Corea Elektric Band in 1987. See for more.