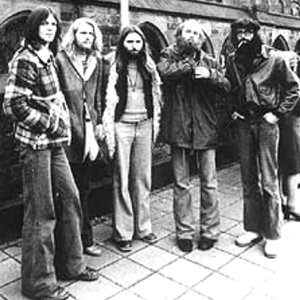 Lokomotive Kreuzberg was founded in Berlin in early 1972, since New Year’s Eve of 1972/73 the band was professionally engaged. Until the dissolution, the band closely linked to the trade unions played in varying occupations and toured Germany intensively, but had to stop at the end of 1977 due to financial problems. In addition to the founding member Andreas Brauer (vocals, keyboard, violin, flute, guitar and percussion), lyricist Kalle Scherfling (vocals), Volker Hiemann (vocals, guitar) and Uwe Holz (vocals, drums, harmonica and percussion), Uve Müllrich (guitar, bass), later replaced by Bernhard Potschka, Manfred Praeker (from 1973) and  Herwig Mitteregger  (from 1976) were also part of the band. See for more.