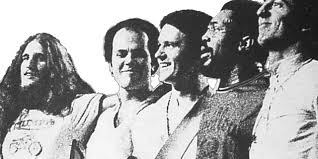 Mahavishnu Orchestra was an American jazz fusion band formed in New York City in 1971, by the English guitarist John McLaughlin. The band underwent several line-up changes throughout its history across two stints from 1971 to 1976 and 1984 to 1987. With its first line-up consisting of musicians Billy Cobham, Jan Hammer, Jerry Goodman and Rick Laird, the band received its initial acclaims for its complex, intense music consisting of a blend of Indian classical music, jazz and psychedelic rock, and their dynamic live performances between 1971 and 1973. See for more.

You Know You Know

East Side West Side