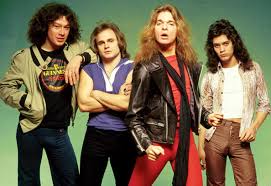 Van Halen is an American hard rock band formed in Pasadena, California in 1972. From 1974 until 1985 the band was composed of guitarist Eddie Van Halen, vocalist David Lee Roth, drummer Alex Van Halen and bassist Michael Anthony. This line-up was changed when David Lee Roth was replaced as vocalist by Sammy Hagar. Critics and fans alike consider their 1978 self-titled debut album Van Halen to be one of the most “original and revolutionary albums to change rock and roll.”The band went on to further success, and by the early 1980s they were one of the most successful rock acts of the time. 1984 was their most successful album. The lead single, “Jump”, became an international hit and their only single to reach number one on the Billboard Hot 100. See for more.

Runnin’ with the devil

You Really Got Me

Why Can’t This Be Love

Why can’t this be love