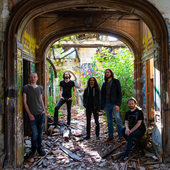 ALTESIA is a Progressive Metal band from Bordeaux, France founded by Clément DARRIEU in 2017. Two years before forming the band, DARRIEU started writing the music for what would become the band’s first album. Once he started to feel confident in his compositions, he built the line-up that would best convey the music and he built the line up of himself (vocals, guitar), Alexis CASANOVA (guitar), Henri BORDILLON (keyboards), Antoine PIROG (bass), and Yann MENAGE (drums). The band released its debut album “Paragon Circus” in 2019. The music is a somewhat familiar form of metal that reflects dark and moody tones with emphasis on song structure. There are some excellent solos in their music, but the band maintains balance in their music to keep the concentration on the songs, not individual egos. The band is also not afraid to add hints of jazz, funk, pop and even death metal. See for more.