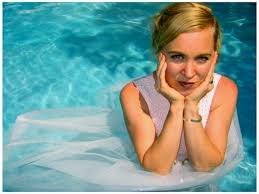 Kristin Hersh (born August 7, 1966) is an American singer and songwriter. She came to prominence in the late 1980s as the leader of the alternative rock group Throwing Muses before launching a solo career emphasizing her acoustic guitar. In 2003, she formed the hardcore punk-influenced power trio 50 Foot Wave. Born in Atlanta as Martha Kristin Hersh, she was raised in Newport, Rhode Island. She learned guitar at age nine from her father, and started writing songs soon after. As a teenager, she formed Throwing Muses in the early 1980s with stepsister Tanya Donelly and other high school friends. See for more.