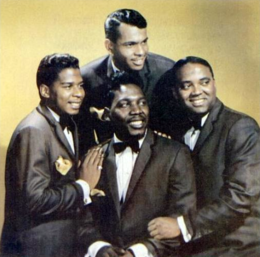 The Drifters is an American singing group that performed soul,  rhythm-and-blues  and  doowop music.  They reached the peak of their popularity in the 50s and early 60s. The group was founded in 1953  by  Clyde McPhatter, whogained fame as a backing singer of Billy Ward & the Dominoes. When McPhatter was fired by the Dominoes, he started his own group, the first version of The Drifters.The best known hits of The Drifters are Up on the roof, Save the last dance for me, Under the boardwalk, There Goes My Baby,  Money Honey  and  Kissin’ in the back row. Four of these six were given a place among the best three hundred songs according to the American music magazine Rolling Stone.

Kissin’ In The Back Row Of The Movies

Save the last dance for me

You’re More than a Number in My Little Red Book

Saturday Night At The Movies

There Goes My Baby

Up on the roof

Some Kind of Wonderful

Up in the streets of Harlem