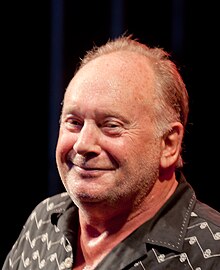 Roger Maxwell Chapman (born 8 April 1942 in Leicester), also known as Chappo, is an English rock vocalist. He is best known as a member of the progressive rock band Family, which he joined along with Charlie Whitney, in 1966 and also the rock, R&B band Streetwalkers formed in 1974. His idiosyncratic brand of showmanship when performing and vocal vibrato led him to become a cult figure on the British rock scene. Chapman is claimed to have said that he was trying to sing like both Little Richard and his idol Ray Charles. Since the early 1980s he has spent much of his time in Germany and has made occasional appearances there and elsewhere. See for more.

Love Is A Hard Thing

Who Put The Night Down On Me

Shadow On The Wall

Let ‘s spend the night together

Hang on to a Dream