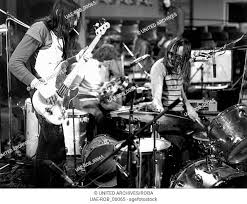 Embryo is a musical collective from Munich which has been active since 1969, although its story started in the mid-1950s in Hof where Christian Burchard and Dieter Serfas met for the first time at the age of 10. It was one of the most important German jazz-rock bands during the 1970s and has also been described as “the most eclectic of the Krautrock bands. In 1969 the band was founded by multi instrumentalist Christian Burchard (drums, vibraphone, santur, keyboard) and Edgar Hofmann (saxophone, flutes). To date more than 400 musicians have played with the collective, some, such as Charlie Mariano, See for more.

People from out the Space