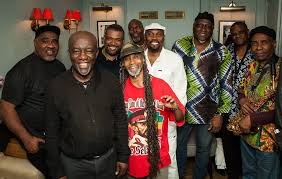 Cymande (See-man-day) were a British funk group that released several albums in the early 1970s and reunited in 2014 with a European tour and a new album released in 2015. The group were formed by Steve Scipio and Patrick Patterson in 1971 in London, England, along with musicians from Guyana, Jamaica, and Saint Vincent. The name Cymande is derived from a calypso word for dove, symbolising peace and love. See for more.

Brothers On The Slide