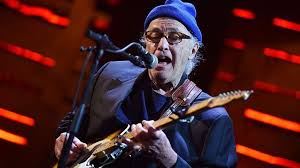 Ryland Peter (Ry) Cooder (Los Angeles, March 15, 1947) is an American guitarist and producer. Initially he worked as a slide guitarist. Cooder has worked a lot as a studio musician with whom he has worked on many film soundtracks. Cooder provided, among other things, the film music for Paris, Texas (1984) by Wim Wenders. He also played in Captain Beefheart’s Magic Band. His trilogy recently appeared: Chavez Ravine, My name is Buddy and I, Flathead. Also appeared in 2008 the collector The UFO has landed that bundles his film music and his solo work.  See for more.

He’ll Have To Go

How Can A Poor Man Stand Such Times And

How Can A Poor Man Stand Such Times And Live

Back To the homepage.