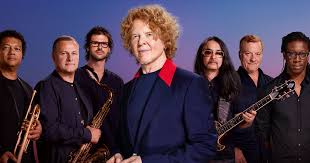 Simply Red is a British soul and pop band which formed in Manchester in 1985. The lead vocalist of the band is singer and songwriter Mick Hucknall, who, by the time the band initially disbanded in 2010, was the only original member left. Since the release of their debut studio album Picture Book (1985), they have had ten songs reach top 10 in the UK Singles Chart, including “Holding Back the Years” and “If You Don’t Know Me by Now”, both of which reached number one on the US Billboard Hot 100. They have had five number one albums in the UK, with their 1991 album, Stars, being one of the best-selling albums in UK chart history. At the 1992 and 1993 Brit Awards, they received the award for Best British Group. See for more.

If You Don’t Know Me By Now

Holding Back The Years

So Not Over You

Say You Love Me

Something Got Me Started

Money’s Too Tight To Mention