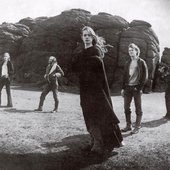 Spriguns of Tolgus (aka Spriguns) were a British folk rock group formed in 1972. They managed to obtain a record deal with a major label and the attention of some significant figures in the folk rock world. They produced four albums with growing originality and recognition but were unable to attain mainstream success and disbanded in 1978. Their lead singer, Mandy Morton, continued her solo career in Scandinavia and the band have now obtained a cult following. Mike and Mandy Morton formed Spriguns of Tolgus as an acoustic duo at their own folk club in Cambridge, England, in 1972. They took the name “Spriguns” from a malignant. Cornish pixie and Tolgus from a tin mine in Cornwall. Initially the band relied on traditional songs, particularly ballads, from England, Scotland and Ireland and were similar in sound to Steeleye Span. See for more.