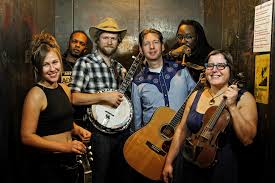 Gangstagrass is a group of musicians in New York City, founded and led by Brooklyn producer Rench, who combine authentic bluegrass and rap into a new genre. Initially formed in 2006, Gangstagrass started to see its music reaching a wide audience when the band’s song “Long Hard Times to Come”, evidently inspired by Lynyrd Skynyrd’s “Things Goin’ On”, was selected to be the opening theme song of the acclaimed television show Justified on FX in early 2010. On July 8, 2010, Gangstagrass producer Rench and rapper T.O.N.E.Z were nominated for an Emmy in the category of Outstanding Original Main Title Theme Music for “Long Hard Times to Come. See for more.

You Can Never Go Home Again

You Can Never Go Home Again

Will The Circle Be Unbroken (live)

Put Your Hands Up High

Steels Gonna Be the Death of Me

I’m Gonna Put You Down