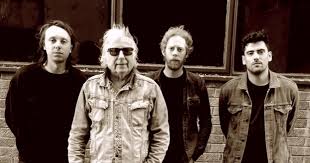 Man are a rock band from South Wales whose style is a mixture of West Coast psychedelia, progressive rock, blues and pub rock. Formed in 1968 as a reincarnation of Welsh rock harmony group ‘’The Bystanders’’, Man are renowned for the extended jams in their live performances. Man evolved out of The Bystanders, a successful close harmony pop group from Merthyr Tydfil who played numerous club residencies in Wales, often playing several clubs a night. The Bystanders issued eight singles, including “98.6” (#45 in UK Singles Chart, in February 1967) which featured in the 2009 film, The Boat That Rocked (although Keith’s version was the bigger hit, reaching No. 24 in the UK). See for more.