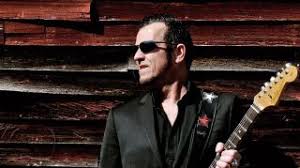 Gary Hoey (born August 23, 1960) is a surfer-rock musician. At fourteen, Hoey often lingered outside Boston’s renowned Berklee College of Music, making friends and offering to pay for lessons. To devote his time to music, he dropped out of high school and began playing Boston’s local clubs and teaching guitar to other young players. He auditioned for Ozzy Osbourne in 1988, when Osbourne was searching for a replacement for Jake E. Lee, but the job went to Zakk Wylde. In 1990, he teamed with singer Joel Ellis, bassist Rex Tennyson, and drummer Frankie Banali to form Heavy Bones. The band released their debut album in 1992, but broke up shortly afterwards. See for more.

Joy to the World