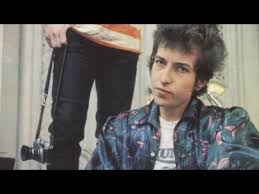 Bob Dylan (/ˈdɪlən/; born Robert Allen Zimmerman, May 24, 1941) is an American songwriter, singer, artist, and writer. He has been influential in popular music and culture for more than five decades. Much of his most celebrated work dates from the 1960s, when his songs chronicled social unrest. Early songs such as “Blowin’ in the Wind” and “The Times They Are a-Changin'” became anthems for the American civil rights and anti-war movements. Leaving behind his initial base in the American folk music revival, his six-minute single “Like a Rolling Stone”, recorded in 1965, enlarged the range of popular music. See for more.

The Times They Are A Changin

All Along the Watchtower

It Ain’t Me Babe

Tangled Up In Blue

Thunder On The Mountain

Blood In My Eyes