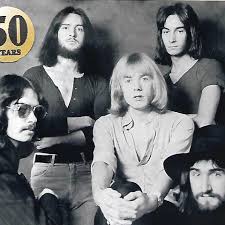 Beggars Opera were a progressive rock band from Glasgow, Scotland, formed in Glasgow in 1969 by guitarist Ricky Gardiner, vocalist Martin Griffiths, and bassist Marshall Erskine. The line-up consisted of Ricky Gardiner (guitar/vocals) (born in 1948, Edinburgh, Scotland), Alan Park (keyboards) (born 10 May 1951, Glasgow, Scotland), Martin Griffiths (vocals),(born 8 October 1949,Newcastle upon Tyne) Marshall Erskine (bass/flute) and Raymond Wilson (drums). After working together building parts of the M40 Motorway near Beaconsfield, the lads moved back to Glasgow to look for an organist and drummer and found Alan Park and Ray Wilson. After an intensive time in rehearsal they took up residency at Burns Howff club/pub in West Regent Street in the center of Glasgow. Tours of Europe followed and the band found success in Germany, appearing on German TV’s legendary “Beat Club” then at the First British Rock Meeting in Speyer in September 1971. See for more.

From Shark To Haggis