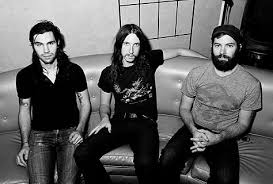 Russian Circles is an American instrumental band based in Chicago, Illinois, United States. The band was originally formed by childhood friends Mike Sullivan and Dave Turncrantz after their previous musical projects dissolved. After parting ways with their original bass player Colin DeKuiper in 2007, the trio was rounded out by Brian Cook. The band has gained widespread recognition based on a series of critically acclaimed albums and extensive international touring. Their name is taken from a drill exercise used in ice hockey, a sport Sullivan and Turncrantz grew up playing in their original hometown of St. Louis. See for more.