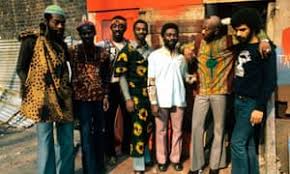 Osibisa is a British Afrobeat band, founded in London in 1969 by four expatriate African and three Caribbean musicians. Their music is a fusion of African, Caribbean, jazz, funk, rock, Latin, and R&B and highlife. Osibisa were the most successful and longest lived of the African-heritage bands in London, alongside such contemporaries as Assagai, Chris McGregor’s Brotherhood of Breath, Demon Fuzz, and Noir, and were largely responsible for the establishment of world music as a marketable genre.  In Ghana in the 1950s, Teddy Osei (saxophone), Sol Amarfio (drums), Mamon Shareef, and Farhan Freere (flute) played in a highlife band called The Star Gazers. See for more.