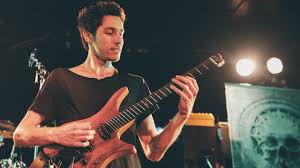 Plini Roessler-Holgate is an Australian guitarist and songwriter. He began by releasing music under the name Halcyon, before switching to the use of his first name. Steve Vai named him “the future of exceptional guitar playing”, and the website MusicRadar named Plini the best prog guitarist of 2017. Plini has released a trilogy of EPs (Other Things and Sweet Nothings in 2013, The End of Everything in 2015). His debut album, Handmade Cities, which Vai described as “one of the finest, forward-thinking, melodic, rhythmically and harmonically deep instrumental guitar records [he has] ever heard”, was released in 2016. See for more.