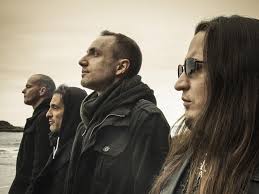 Agalloch (/ˈæɡəˌlɑːx/) was an American black metal band from Portland, Oregon. Formed in 1995 by frontman John Haughm, they released five full-length albums, four EPs, two singles, one split single, two demos, four compilation albums and one live video album. They announced their disbandment in May 2016. Named after the resinous wood of the agarwood (Aquilaria agallocha), Agalloch began as the creation of Haughm and keyboardist Shane Breyer. In early 1996, the duo began composing material. Guitarist Don Anderson joined the band that summer to further refine the songs, which were recorded that autumn for release as the band’s first demo tape, From Which of This Oak. See for more.

Plateau of the Ages

Where Shade Once Was