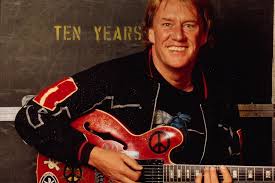 Alvin Lee (born Graham Anthony Barnes, 19 December 1944 – 6 March 2013) was a British guitarist and singer, best known as the lead guitarist and lead singer with the blues-rock band Ten Years After. He was born in Nottingham and attended the Margaret Glen-Bott School in Wollaton  which was a precursor to Comprehensive Schools with grammar and secondary modern streams. He began playing guitar at the age of 13, and with Leo Lyons formed the core of the band Ten Years After in 1960. See for more.

I Want You(She’s So Heavy)

I Don’t Give A Damn