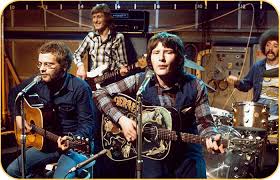 Stealers Wheel are a Scottish folk rock/rock band formed in Paisley, Renfrewshire in 1972 by former school friends Joe Egan and Gerry Rafferty.The band broke up in 1975 and re-formed without Egan or Rafferty in 2008. Rafferty and Egan first met when they were teenagers in Paisley and they became the core of Stealers Wheel. In the early 1970s, the band was considered to be the British version of American folk/rock supergroup Crosby, Stills, Nash & Young. They were initially joined by Roger Brown, Rab Noakes and Ian Campbell in 1972. See for more.

Stuck In The Middle With You

You Put Something Better Inside Me