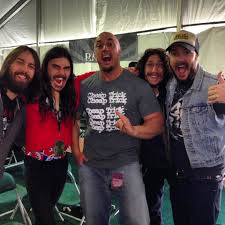 Crobot is an American hard rock band from Pottsville, Pennsylvania composed of Brandon Yeagley, Chris Bishop, Jake Figueroa and Paul Figueroa. They were signed to Wind-up Records in 2013 and are known for their high-energy performances and affinity for beards. In the Summer of 2011, Brandon Yeagley and Chris Bishop created Crobot. In 2012 the band’s original lineup self released their debut EP, The Legend of the Spaceborne Killer, along with a music video for the eponymous first single. Later that year, the rhythm section of the band was revamped with the addition of the Figueroa brothers on bass and drums. See for more.

Legend of the Spaceborne Killer (Visualizer)

Fly On The Wall (Audio)

Queen of the Light (Audio)