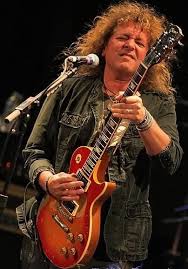 Dave Meniketti (born December 12, 1953) is the singer, songwriter and lead guitarist for Hard Rock/Heavy Metal band Y&T. He has also released three solo efforts (including “Live in Japan”), one of which is more blues-oriented. He currently tours worldwide with Y&T. Dave Meniketti was born and raised in Oakland, California where he has been an icon for guitar players worldwide and a San Francisco Bay Area vocal and guitar legend for over two decades. Perhaps it is the diversity of the artists that influenced him as a kid (Jimi Hendrix, John Coltrane, Leslie West, James Brown, Led Zeppelin) that is responsible for his varied expressions in both his singing and his guitar playing. He’s ranked tops in Best Guitarist polls in newspapers, magazines, and television shows around the world. See for more.

Rainbow In The Dark

Dave Meniketti of Y & T during The Monsters of Rock Cruise