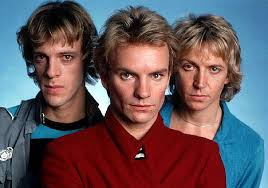 The Police were an English rock band formed in London in 1977. For the vast majority of their history, the band consisted of Sting (lead vocals, bass), Andy Summers (guitar) and Stewart Copeland (drums). The Police became globally popular in the late 1970s and are generally regarded as one of the first new wave groups to achieve mainstream success, playing a style of rock that was influenced by punk, reggae, and jazz. See for more.

Every Breath You Take

Message In A Bottle

Dont Stand So Close To Me

Every Little Thing She Does Is Magic

Walking On The Moon