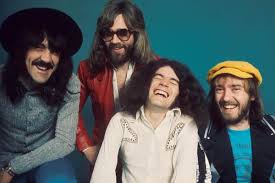 Nazareth are a Scottish hard rock band, founded in 1968, that had several hits in the United Kingdom in the early 1970s, and established an international audience with their 1975 album Hair of the Dog. Perhaps their best-known hit single was a cover of the ballad “Love Hurts”, in 1975. The band continues to record and tour. Nazareth formed in December 1968 in Dunfermline, Scotland, from the remaining members of semi-professional local group The Shadettes (formed in 1961) by vocalist Dan McCafferty, guitarist Manny Charlton (ex Mark V and The Red Hawks), bassist Pete Agnew, and drummer Darrell Sweet. See for more.