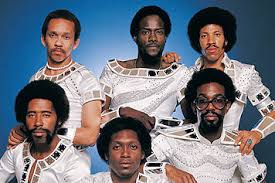 The Commodores is an American funk/soul band, which was at its peak in the 1970s. The members of the group met as mostly freshmen at Tuskegee Institute (now Tuskegee University) in 1968, and signed with Motown in November 1972, having first caught the public eye opening for The Jackson 5 while on tour. The group is best known for their ballads, such as “Easy” and “Three Times a Lady”, but, for the most part, the group recorded funky, driven dance-floor hits which include “Brick House”, “The Bump”, “Fancy Dancer”, and “Too Hot ta Trot”. See for more.