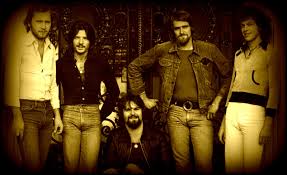 Novalis was a 1970s Krautrock group formed in Germany. Their best-known albums include Sommerabend and Wer Schmetterlinge lachen hört. Vocalist Jürgen Wentzel and bassist Heino Schünzel placed a newspaper advertisement in search of bandmates in Hamburg in 1971. They were joined by organist Lutz Rahn and drummer Hartwig Biereichel. Together with guitarist Carlo Karges they formed Mosaik, soon changing the name of the band to Novalis. After the release of their first album in 1973, Wentzel left the group and Heino Schünzel took on vocal duties. Carlo Karges, who would go on to join Nena’s backing band, was replaced by Detlef Job. Austrian vocalist Fred Mühlböck joined the group in 1976. See for more.