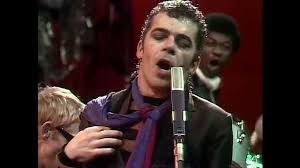 Ian Robins Dury (12 May 1942 – 27 March 2000) was an English singer-songwriter and actor who rose to fame during the late 1970s, during the punk and new wave era of rock music. He was the lead singer of Ian Dury and the Blockheads and before that of Kilburn and the High Roads. Dury was born, and spent his early years, at his parents’ home at 43 Weald Rise, Harrow Weald, Middlesex (though he often pretended that he had been born in Upminster, Essex, which all but one of his obituaries in the UK national press stated as fact). See for more.

Hit Me With Your Rhythm Stick

Reasons To Be Cheerful