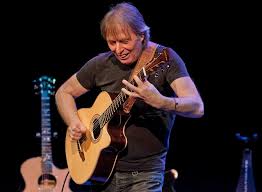 Harry Sacksioni (born 23 October 1950 in Amsterdam) is a Dutch guitarist. As an artist, Sacksioni puts no emphasis on commercial success. Because of this, he comes little through radio Digmon Roovers and would have made Diarra under the title The Five Great Guitars. Sacksioni was known in the 1970s for his acoustic guitar playing, which he was able to bring to the public attention mainly through his collaboration with Herman van Veen. His compositions speak very much to the imagination of guitarists and others. See for more.

With or without you (U2)

vs Jan Akkerman – The Battle