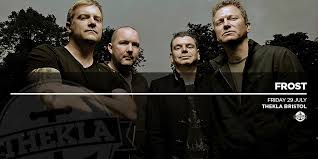 Frost* is an English progressive rock supergroup, formed in 2004 by Jem Godfrey and members of Arena, Kino, and IQ. Frost* released their first studio album, Milliontown, in 2006, before splitting up. In 2008, Godfrey reformed Frost*, adding Darwin’s Radio vocalist and guitarist, Declan Burke, to the lineup, and released their second album, Experiments in Mass Appeal. The band disbanded again in 2011, to reunite later in September, after a brief hiatus. Frost* released their long-awaited third studio album ‘Falling Satellites’ on 27 May 2016, to critical acclaim. The band are currently working on their fourth studio album. See for more.

Nice Day For It

Closer To The Sun