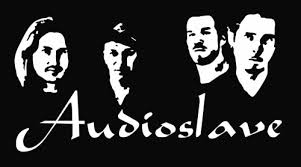 Audioslave was an American rock supergroup formed in Los Angeles, California, in 2001 and disbanded in 2007. The four-piece band consisted of then-former Soundgarden lead singer/rhythm guitarist Chris Cornell, and then-former Rage Against the Machine members Tom Morello (lead guitar), Tim Commerford (bass/backing vocals), and Brad Wilk (drums). Critics first described Audioslave as a combination of Soundgarden and Rage Against the Machine, but by the band’s second album, Out of Exile, it was noted that they had established a separate identity. See for more.

.Show Me How to Live

Your Time Has Come

I Am The Highway

Shadow on the Sun

Shape of things to come