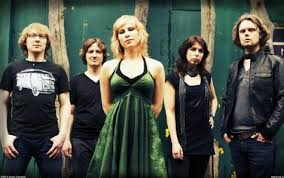 The Gathering is a Dutch rock band, founded in 1989 by brothers Hans and René Rutten and vocalist Bart Smitsin Oss, North Brabant. The Gathering earliest releases were categorized as atmospheric doom metal with influences from death metalacts like Celtic Frost and Hellhammer. In 1998 with the release of their fifth studio album, How to Measure a Planet?, they had a major shift in musical style, with the group acknowledging the growing influence of shoegazing, post-rock, experimental rock and the more ethereal sounds of 4AD bands, such as Dead Can Dance, Cocteau Twins, as well as Pink Floyd, Radiohead and Massive Attack; they expanded their sound, which acquired characteristics of progressive, alternative rock, and trip hop and gained success and recognition beyond the European borders. See for more.