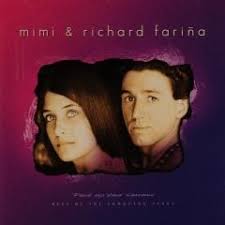 in 30 April 1966, at around lunchtime, Richard Fariña sat down at a table at the Thunderbird bookstore and cafe in Carmel, California, to sign copies of his freshly minted first novel Been Down So Long It Looks Like Up To Me, published just two days before.The sky was blue and California-cloudless, and Fariña, 29, had organised a surprise 21st birthday party for his wife Mimi, the sister of Joan Baez. Fariña signed copy after copy of his novel, the dedication page of which read: “This one is for Mimi.” A little after seven that evening, Richard Fariña was dead, a motorcycle accident on the winding Carmel Valley Road had claimed the life of an artist bursting with potential, at the very beginning of his career. See for more, Richard and Mimi.

The quiet joys of brotherhood

Pack Up Your Sorrows