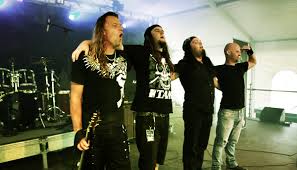 Swedish/Norwegian ProgPowerMetal band.
Originally founded by former Dionysus
drummer Ronny milianowicz in 2006.  The line
up was completed In 2007 with singer JanThore
Grefstad (ex Highland Glory)-Guitarist Toya
Johansson and bassplayer Nobby Noberg(ex
Dionysus).  The band signed a worldwide deal
with Frontiers records that same year- which up until today resulted in two albums, “In Shadows Lost From The Brave”2008 and “Pandeamonium”2009. Extensive live appearances followed with gigs all the way from North Cap down through Europe- also entered stage in the prestigious festival “ProgPowerUSA” in Atlanta.  Present day 2011, what’s to come… Together with their new drummer Oscar Nilsson, SaintDeamon is preparing for a third album and the plans for the festival year 2014 is taking shape.  So welcome to join us on the next step of our great journey…….Klik hier voor meer informatie.

A Day To Come