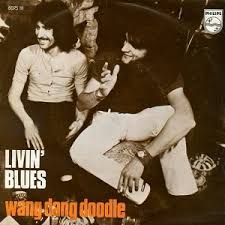 Livin’ Blues was a blues rock group from The Hague. Around 1970 the band with Cuby + Blizzards was counted as the absolute top of the Dutch blues world. The firm core consisted of Ted Oberg (guitar), John Lagrand (harmonica) and Nicko Christiansen (vocals). The group’s Manager was Ted’s mother, Mrs Oberg. The band was founded in 1967 by Ted Oberg. After some occupation changes, the single Murphy McCoy (written by George Kooymans) will be recorded in 1968 alongside Oberg Cesar Zuiderwijk (drums), Gerard Strötbaum (bass guitar), Nicko Christiansen and John Lagrand. The last two formed rather the Bluesduo Indiscrimination. In this occupation, the band takes care of the Fleetwood Mac program in February 1969 (performances in A.O. Rijen, Rotterdam and Amsterdam). See for more.

Ain’t No Use Crying

I Came Home At night