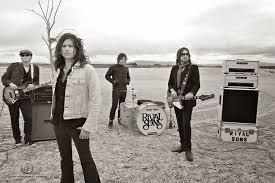 Rival Sons is an American rock band from Long Beach, California. Rival Sons was formed in 2009 from the ashes of guitarist Scott Holiday’s previous band Black Summer Crush (which featured Michael Miley on drums and Robin Everhart on bass). The band took shape when singer Jay Buchanan was persuaded to come in as vocalist on the re-recording of Before the Fire. The band currently features bassist Dave Beste after Robin Everhart left in August 2013. See for more.

All Over The Road