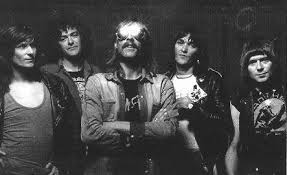 Hawkwind are an English rock band, one of the earliest space rock groups. Their lyrics favour urban and science fiction themes. Formed in November 1969, Hawkwind have gone through many incarnations and styles of music. Dozens of musicians, dancers, and writers have worked with the group since their inception. Dave Brock and Mick Slattery had been in the London-based psychedelic band Famous Cure, and a meeting with bassist John Harrison revealed a mutual interest in electronic music which led the trio to embark upon a new musical venture together. See for more.

Master of the Universe

Spirit Of The Age