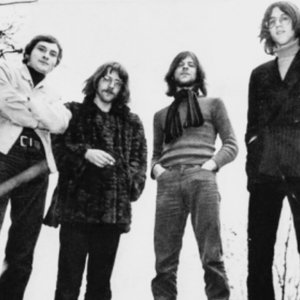 A little known hard rock and psychedelic band, who just made the one album, My Solid Ground were amongst the most obscure of acts on Bacillus Records, but these days they are much better known amongst Krautrock aficionados. My Solid Ground originated in 1968 from the town Rüsselsheim, with the line-up: Bernhard Rendel (guitars, vocals), with Willy Waid (drums) and Uli Weyrauch (bass). Establishing themselves as a psychedelic hard-rock band, unbefitting their name they were never a solid or stable band, with one Werner Geilenkirchen playing bass for a year before being replaced by Karl-Heinrich Dörfler. Gelling the sound proper was Ingo Werner on keyboards, however it seems that he kept leaving the band and returning. See for more.