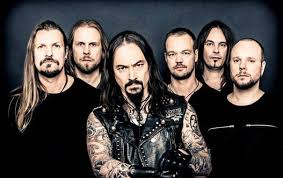 Swallow the Sun is a Finnish extreme metal band founded in 2000 by Juha Raivio. Their death-doom style emphasizes melody and atmosphere, and occasionally steps into gothic and black metal territory. They have released six full-length albums, one triple album, one EP, one demo, and five singles. Swallow the Sun was formed in early 2000 by Juha Raivio, soon joined by Pasi Pasanen (both had played together in Plutonium Orange). They rehearsed a couple of songs, one of them being “Through Her Silvery Body” which would end up on their first demo, Out of This Gloomy Light. See for more.

Cult of a Dying Sun

From Happiness To Dust